I posted this in stages to Facebook while I was working on it, so now I’m collecting it at the blog. 😀

I’m currently writing book 4 of Shifter Agents, Noah’s book, and he’s a tiger, so I thought it would be appropriate to do a tiger jack’o’lantern this year. Now, I should preface all of this by saying that I haven’t carved a pumpkin in years, and I’ve NEVER tried to do one of the fancy designs … so, not gonna lie, when I first started posting photos of the process to Facebook, I figured the last picture was going to be a dismally hacked pumpkin with candle light winking out of all the accidental holes.

But it actually came out pretty good! It would’ve been a disaster if I’d stuck to my original plan, which was to carve it with a knife. Luckily we have some woodworking gouges left over from a printmaking class I took in college (a certain number of … decades … ago) and those turned out to be the perfect tools for the job!

So, without further ado … let’s have a look.

This is going to go great, right?? I have no idea what I’m doing, hahaha oh nooooo.

Scraping out pumpkin guts – so far so good! The ice cream scoop worked REALLY well. I’ve never tried it on a pumpkin before, but I recently started using one for scraping out winter squash after reading a tip online, and that works much better than a spoon! So I thought maybe it would work for a pumpkin too.

And now the woodworking gouges have come out! I tried exactly one cut with the knife before realizing that wasn’t going to work. I followed the instructions online and used a pointed tool from the woodworking kit (I don’t know the name of it) to poke little holes all along the pattern after taping it to the pumpkin, and then took it off and cut with the gouges along the lines. 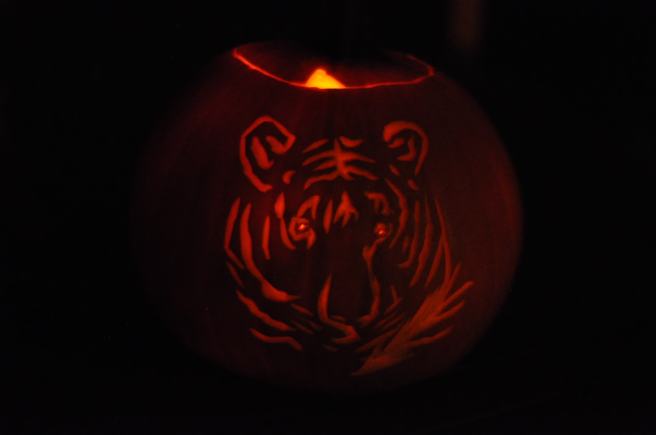 One thing I did wrong is that I kept having to go back and scrape out more pumpkin from the inside of the jack’o’lantern because the candle didn’t show through. When I started out, I didn’t realize that this kind of design isn’t cut all the way through the pumpkin wall like with the ordinary kind of jack’o’lantern, so I didn’t scrape away enough pumpkin flesh from inside. I think I should have dug deeper with the gouges too — I was afraid of accidentally cutting too deep and ruining it! Well, I’ll know for next time, and I’m super happy with how this came out, especially since I was expecting total disaster!