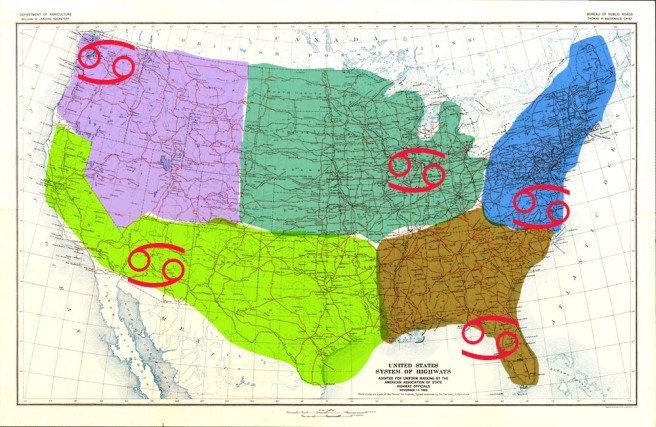 Here is a quick-and-dirty map I put together for my own reference of where the different Shifter Crimes Bureau field offices and (approximate) jurisdictions are. I am not sure why I used the Cancer zodiac symbol to represent them. I was trying to find a star in my wingdings font, but I found that and I just liked it?

Anyway, there are five regional offices. We will get our first look at the Southwest bureau in the tiger shifter book I’m currently working on (it’s in an old military base near Tucson, out in the desert). There is also a Midwest office, an East Coast one, and one that handles the South.

The boundaries are REALLY vague right now and I’m not at all sure about where exactly they go. One thing I did realize while I was making this map is that the Seattle office should probably cover Alaska and Hawai’i too, so maybe I’ll send them to Hawai’i sometime soon.

As you may have noticed, I haven’t had a book out since May. That is, shall we say, not how I planned things. The Noah book has been a really slow one to write, plus it’s turning out to be one of the long ones (I’m optimistically aiming for 120K now, about the same length as Guard Wolf; this is up from an original estimate of 60K).

During the times I’m stuck on Tiger, I’ve been working on side projects. The result is that I’m now hip-deep in half-finished novels and short stories in the Shifter Agents universe. If all goes well, 2017 should be a bonanza. It’s just a matter of finishing things.

Besides Noah’s book, the other projects I’m currently working on are:

In addition to that, I’ve tentatively plotted the Shifter Agents series out until book 8 or 9. So, uh, lots more books coming! I just have to write them!

And on that front, here’s how all of those are currently looking, thanks to some handy little word-count status meters from Writertopia.

Final word counts are, of course, tentative. Whatever finishes first will be published first! Right now I expect it’s probably going to be the bartender/bounty hunter one followed by Tiger. The Valeria spinoff will definitely not be first, because Tiger sets up a couple of necessary plot things for it.